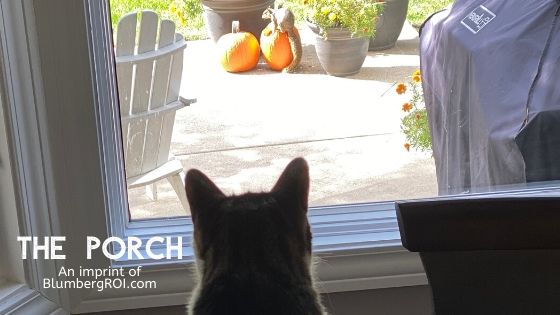 I have never liked cats. After all, I grew up with dogs and Ford.  Cats and Chevy were bad words in our house. Which was why I was not happy when our son, Ryan, came home from college one summer with a kitten in tow – one he had rescued from a shelter.

What made it crazy was that Ryan didn’t even want a cat. This cat, which he had named Critter, was part of his devious and admittedly creative ploy to get the dog he had always wanted. Unlike me, my wife Cindy grew-up in a house with a cat that lived nine lives. She loves cats and Ryan knew it.  His secretive plan was to have his mom fall in love with Critter all summer long and then threaten to take Critter back to school with him – if he couldn’t get a dog. There was absolutely no way Cindy was going to fall for this … well, until she did in the middle of August.  Yet, knowing Ryan would want to get a “horse” for a dog, she agreed albeit with a 20-pound limit.

To make a long story short, Ryan got back to school and headed straight to the shelter where he found the dog he really wanted.  The only problem was that the expected grown weight was anticipated at about 50 pounds.  After much debate he reluctantly decided he would just wait until he was on his own so he could get the dog he really wanted. And so, after all of that, we ended up with no dog.

And through layers of resistance and denial, I found that Critter was quite hilarious. Of course, he loved my cat-loving wife, but what I hated was that he seemed to love me too. As every pet owner can relate, Critter became the mascot of our family. Our kids would eventually and rightfully say: Critter ran the house! He was quite the entertainer and by the time the Holidays rolled around we had renamed him “Crazy” for all of his spontaneous entertainment tactics.

Crazy started making a habit of hanging-out in my home office while I worked – sometimes hanging out in the conference chair across from my desk like he was applying for a job or something.  We spent long hours together in my office. And when I would return in the late hours of the night from another speaking trip on the road, he made a habit of awakening himself from his catnap to welcome me home. It wouldn’t be long before I was having to publicly admit: “I don’t like cats …

But I sure love Crazy.”

Over the decade to follow, I would come to learn that Crazy wasn’t only an entertainer, he was also a teacher – if the student was willing to notice:

Lesson #1:  Connection is healthier than attachment.  Crazy really didn’t like to be picked-up, although he would oblige me for 60-seconds or so whenever I decided I wanted to hold him.  He wouldn’t get mad; he would just whine a bit to let me know when my time was up.  At the same time, Crazy loved to be in the room with you as if to say … connection is more authentic than attachment.

Lesson #2:  Live in the present moment and you will see much more.  Crazy certainly had his habits and routines.  Some were seasonal and others were daily.  But for the most part, Crazy lived in the present moment. He could go into the longest stares you have ever seen. My life-long mentor Jim, always a wealth of wisdom, recently shared with me:  You know John, when you look at a tree for 30 minutes straight, it is amazing what you will see.  They both had something to teach me about being fully present.  About the only thing that could break Crazy’s stare was playing some soft piano music – in about 90 seconds he would be tucking himself in a semi-circle enjoying the sound until his eye lids grew too heavy to listen any longer.

You might say that all of life was “a porch” for Crazy. One thing for which you could be certain – wherever Crazy was, he was fully present. He helped me be more present just by looking at his staring eyes endlessly looking back at me — or by letting me pet his back as he fell asleep while I quietly watched him breath in then out … and in then out.

And then there was the most important lesson.

Lesson #3:  Love your enemies.  This is the great teaching no one wants to take literally.  You can rest assured that you will never see this biblical proclamation on a poster board at any professional sporting event:  Love your enemies. Are you kidding me?  Most can’t even love the opposing fans! We dig a hole in our dualistic black and white thinking.  Crazy had to penetrate my long-standing pre-determined dislike of cats.  He just didn’t know that – but then again, maybe he did.  Either way, he never gave-up until I couldn’t help but give-in … blinding me from my own bias to see him not as a cat, but simply as Crazy.  How easy it would be to love our enemies if we would only stop labeling categories and started loving individuals.

Two weeks ago, today, Crazy enjoyed the breakfast he so looked forward to each morning. Within the hour his heart would give out in only a matter of seconds … surely a half dozen years before we could possibly bear to say goodbye. He simply looked asleep as I sat next to him stroking his still body as I had done hundreds of times before. Only one thing was missing — his sweet repetitive rhythmic breathing.

As I wanted to grab hold, I knew Crazy had one last lesson to teach me:  Let go of your attachment so that we can forever be connected.

I knew right then that I had been cat-nipped.

I would love to hear your thoughts, insights, and comments below.

Editor’s Note: You might be wondering if Ryan ever got his dog.  He did about 7 years later; a rescue dog that weighs about 7 pounds. Wet.  And better yet, this past Monday, Ryan and his wife Kirstin gave birth to their first child … Declan Carter Blumberg weighing-in at 7 pounds 3 ounces.  Maybe someday Declan will talk his dad into getting a 50-pound dog.  Or maybe not … Declan might just prefer a cat.