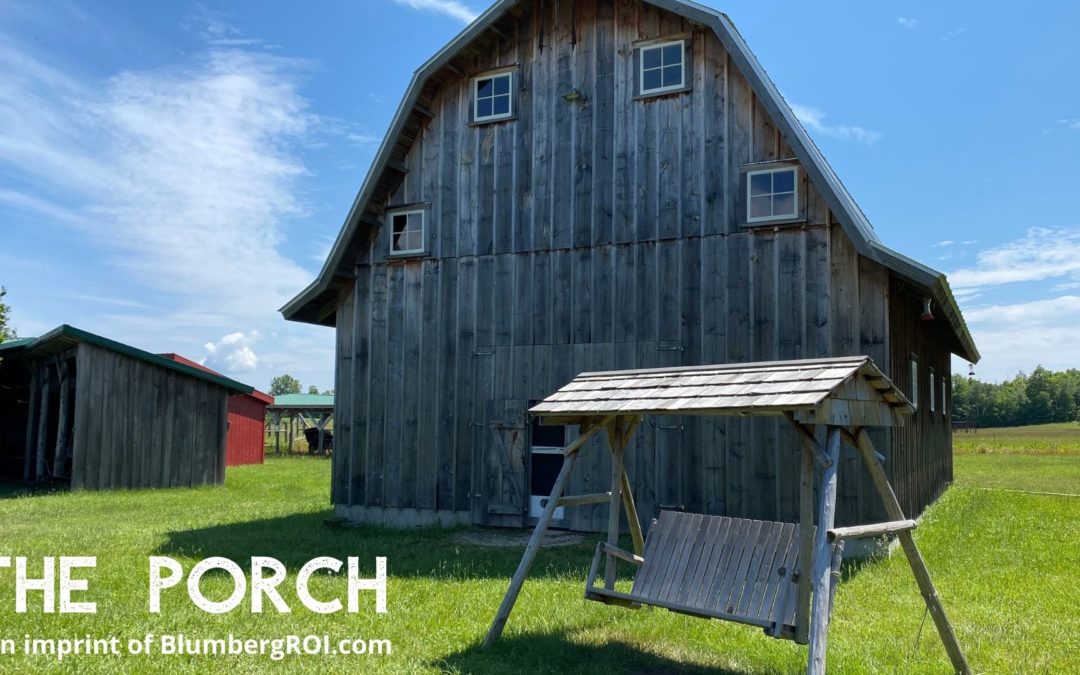 As you pull-up a swing on “the porch” this month, I’m inclined to warn you this reflection on the conundrum of growth may seem somewhat vague. And it may seem to wander a bit. Not by design, but perhaps by necessity. I would also propose there may have never been a better time to explore such a conundrum!

Growth itself can be quite vague. If you want to embrace deep personal growth, it rarely makes any sense at all – when you first begin. If it makes a lot of sense, it’s unlikely the growth I’m referring to. Only a few will voluntarily travel this path of growth very far at all – for it is amid the early confusion of meaningful growth that most will turn around and return to the familiar. It is totally understandable. I’ve been there and maybe you have too. Maybe this explains why real growth can take decades if not centuries for institutions – and for individuals, well, maybe our entire life!

What has growth meant to you? How have you experienced times of notable growth? When was the last time you felt a real sense of exponential personal growth?

A quarter of a century ago, as I left Arthur Andersen and began developing content on leadership, I expanded on this last question, above, asking an endless number of individuals to describe the circumstances they were in when they experienced an exponential time of personal growth. Not one person took me to a time when they were in their stride or a time of great success. While the details were different for each person, their context revealed a common theme of uncertainty, the unfamiliar – and in every case, the unplanned.

It dawns on me that we can talk a good game when it comes to the concept of growth. Especially when it is about the growth of others.

Or when someone else is paying for it.

I’ve often said: “Someone who is willing to pay a significant sum to attend a professional sporting event that provides entertainment for a day in their life, would rarely consider personally paying the same amount for a program that could change the experience of their whole life.”

But then again, maybe it has nothing to do with money. Perhaps it has more to do with an anonymous seat in a stadium that gives us the permission to demand from those on the field while knowing the second option personally demands from us – in a way that only real growth so commonly requires.

And no doubt we can also talk a good game of growth when it is relatively safe – in other words, a proven method or strategy in which conventional wisdom is in full agreement that it will work. This familiar kind of growth stretches one’s discipline. It might include stopping or starting a habit. It likely involves improvement or excellence of a set of known factors. It can indeed be good. This can be true at the individual level as well as at an organizational or institutional level.

Often this growth is measured in terms of building-on or expanding. It will most likely end-up being seen as bigger or better than than its original form. It can stretch a lot of known limits. And it can often be measured and valued by the extent of concrete metrics. This is the nature of exterior growth.

Yet rarely does it challenge one’s deep imagination.

Interior growth rarely happens without stretching our imagination – and sometimes the need to completely reimagine. It can feel like everything is turned upside down or inside out. Rather than the expansion of the known, it is more often the abandonment of it – for it has as much to do with unlearning as it has to do with learning. It is not about experiencing a different version of the same, but rather perceiving an experience never known before.

Interior growth depends on trusting the uncertainty of the unknown, rather than relying on the comfort and proven nature of what we perceive as the given. It often has more to do with what has been left out rather than embellishing that which has been left in. And while the price might be small, it can feel like it could cost everything.

Unlike exterior growth, where immediate benefits can be seen by others – interior growth comes with gradual advancements often only known by you. Rather than spreading a soothing salve of comfort on the veneer while ignoring an undeniable discomfort in your gut – internal growth stirs a sense of discomfort on the surface while unveiling an unexplainable peace deep within. Exterior growth often requires you to do more.

The irony is that seasons of deep internal growth more likely find you than the other way around. They can arrive at any age and in most any season. Yet, perhaps when we intentionally venture into the unknown, the unfamiliar, and the unplanned – we are far more prepared to embrace the call of deep internal personal growth when it presents itself.

It is all quite a conundrum worth exploring. For we may very well be in a unique season where the demand for growth has found all of us at the same time – simultaneously for many different reasons.

As always, I’d love for you to share your thoughts! We could all benefit if you would be so kind to share below.